What Is a Herniated Disc?

A herniated disc is a condition that can strike any part of the spine, but is most common in the lower back (lumbar spine) or neck (cervical spine). The spine is made up of a column of stacked bones called vertebrae. The vertebrae are separated by flat, gelatinous discs that provide cushioning between the bones. The discs are made of a tough outer layer, called the annulus fibrosis, and a jelly-type center, called the nucleus pulposus. Over time, the disc begins to deteriorate, most commonly by drying out and shrinking. When this happens, the disc’s outer wall can become weak and tear (herniate), allowing the disc’s center to push out onto very sensitive spinal nerves, leading to pain and irritation. A bulging disc occurs when the outer layer remains intact but bulges outward, pressing against nerves. A herniated lumbar disc is one of the most common causes of low back pain, primarily because the lower back bears the majority of the body’s weight. 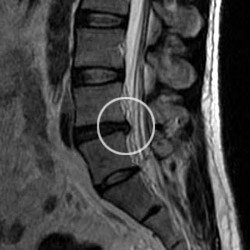 What Are the Symptoms of a Herniated Disc?

The symptoms of herniated disc vary widely based upon severity, location on the spine and a patient’s tolerance for pain. Some patients experience no pain if the herniated disc is not pressing on a nerve. For others, symptoms include:

What Are the Causes of a Herniated Disc?

Typically, injury or a single distinct incident leads to a herniated or ruptured disc, but the single movement may be years in the making. As we age, the discs in our spine lose water and elasticity, which can lead to a rupture, often from a simple twisting of the spine or other minor strain. Typically, a herniated disc is preceded by a long period of low back pain. In addition, the following can contribute to herniated discs:

What Are the Treatments for a Herniated Disc?

Most herniated disc patients do not require surgery and the condition is resolved through conservative measures. The physicians at Midwest Orthopaedics at Rush may prescribe these treatments in combination or individually, depending on the particular case, to ease irritation of the nerve and alleviate pain:

If conservative treatments fail to provide adequate pain relief or a patient continues to suffer from loss of function, especially nerve damage, Dr. Singh may recommend spinal surgery to repair the herniated or bulging disc in the lower back. Recent studies by the National Institute of Health show that surgical intervention leads to improved clinical outcomes when compared to non-surgical treatments for herniated lumbar discs.