Although many would say that it was misfortune that led south suburban resident Paul Peebles, 53, to renowned spine surgeon Dr. Kern Singh at Midwest Orthopaedics at Rush, Paul refers to it as “divine intervention.”

It was the fall of 2011 and a normal day for Paul when an unfortunate accident severely injured him. Paul’s family doctor suggested he see Dr. Singh for treatment.

Dr. Singh is known for his minimally invasive techniques for spine surgery, which is what Paul needed. Paul’s surgery was successful. However, this was not the last time Paul would seek help from Dr. Singh.

Soon after the accident, Paul’s daughter Heidee became immobilized with back pain. She had been noticing pain for about a year, and dismissed it as trivial. But, in January of this year, she discovered the seriousness of her condition. She was walking to class when her back tightened up and she was unable to move or walk. Her father took her to the nearest emergency room where she was diagnosed with a spinal fracture. Paul knew just who to call.

After a close evaluation of the spine, Dr. Singh found a rare giant cell tumor in the T12 vertebrae in the center of her back. Dr. Singh is one of a handful of spine surgeons in the country who can remove spinal tumors using a minimally invasive procedure. Fortunately, the tumor was benign and could be removed, but this would require her to undergo a very risky surgery. Dr. Singh has performed many of these complex surgeries – more than most other surgeons perform in their careers.

The surgery was done thorough a small incision, about an inch in length, below her right rib cage. Dr. Singh was able to successfully remove the tumor and fuse her fractured vertebrae with a metallic cage and screws placed under x-ray guidance. The surgery took four hours. Heidee is now undergoing physical therapy and her strength has recovered. Both Paul and his daughter Heidee describe this experience as the most poignant of their lives.

“It was a miracle that my surgery would lead me to one of the most skilled spine surgeons in the country, who would eventually be responsible for saving my daughter’s life. As far as I’m concerned, it was some sort of divine intervention.”

Dr. Singh and his partner Dr. Frank Phillips are lead spine surgeons at the new Midwest Orthopaedics at Rush Minimally Invasive Spine Institute. These surgeons are known for their research, FDA clinical trial participation and their use of the latest cutting-edge minimally invasive spine procedures. 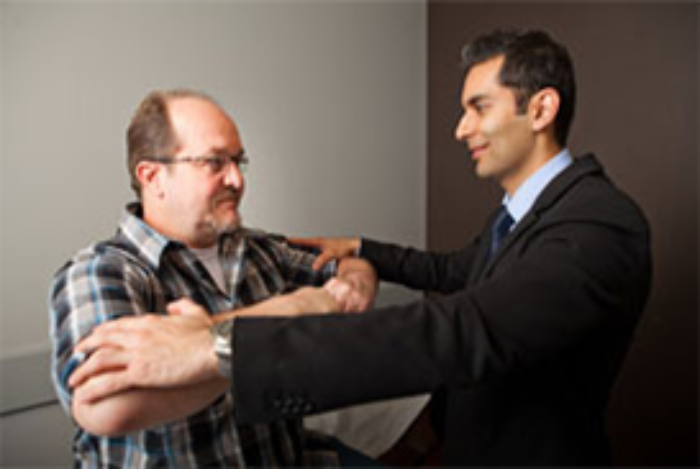